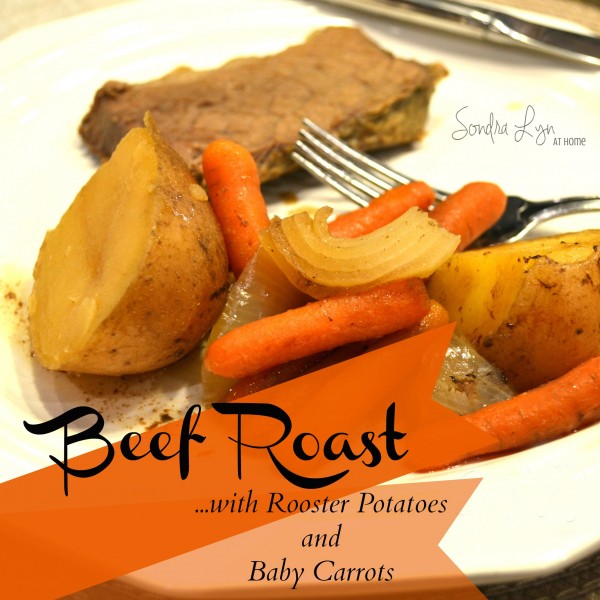 Something happens to you when you ‘retire’ and become a grandma. You start eating out all the time. Well, truthfully, it started before I left my job, and BEFORE I became a grandma, now that I think about it!

Maybe it has more to do with having spent years in the kitchen, planning menus weekly and just being the chief cook and bottle-washer!

Well. No matter. However it happened, we had begun eating out way too much. And you know… and I know… that food prepared in eateries is often not the healthiest choice!

So one of my goals for 2014 is to get back to cooking decent meals on a regular basis.

And what is a Rooster Potato, you ask? Well, I had never heard of them either. I really went looking for red potatoes, and these were so good-looking that I decided to try them! And they are quite delicious!! If you want to find out more about them click here. First cultivated in Ireland, this gem of a spud made its way to the US within the last decade!

I got out my {relatively} new slow cooker and set to work in the late morning. A good cut of roast should cook for approx. 6 hours in a slow cooker. This cut is a rump round roast. It was a lot bigger than the picture shows, but we were ready to eat before I had shot the photos, so half of it is already gone!!

Now the order in which you do the next few steps is pretty important. Wash and quarter the potatoes. Into the crock-pot they go. Then the carrots and quartered onion. The roast goes on top, fat side up. I usually don’t sear the roast first, but you can if you want a browner look to the meat. Then I sprinkle the onion soup mix on top, mix the sauces with the water and pour that over everything.

Slow-cooking doesn’t take a great deal of liquid, so don’t use too much. I typically don’t add more salt and it usually comes out fine. The sauces and soup mix have plenty of salt in them. 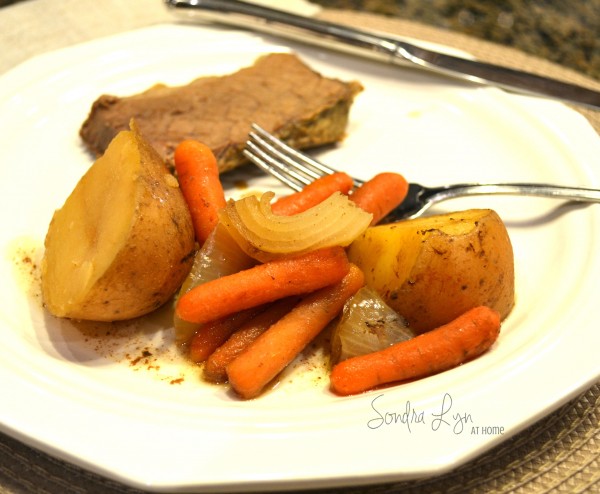 « Warm Drinks for Cold Days- Part 2
Love is All You Need- and a Valentine’s Day Giveaway! »