I’m so glad to be back from a short blogging break! While it was a break from writing, it wasn’t a break from learning.

This all started about a month ago, when some blogger friends of mine and I were chatting online about the various blogging conferences being offered around the country. As you might remember, I have attended 2 previous Haven conferences (2013 and 2014).

One that I had heard little about was the Design Blogger Conference, so I took a look at their website. It sounded like a truly fabulous experience, but the registration fee was a bit steep for me. I noticed a tab on their menu about a Design Bloggers Conference Scholarship. So, I figured ‘what have I got to lose?’… I followed the entry directions… and I was awarded one of 5 scholarships to attend! OK. Seriously? I was thrilled! 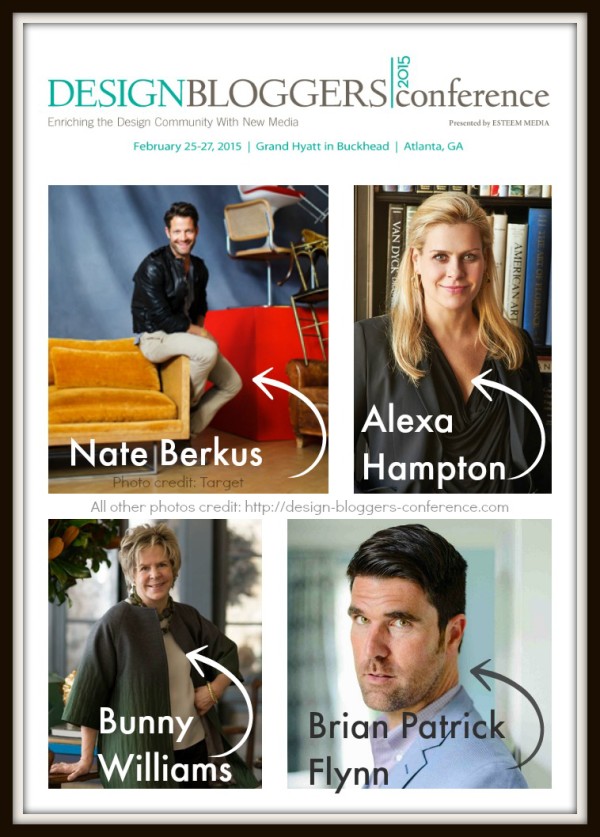 The conference was last week in Atlanta at the Grand Hyatt Buckhead. The speaker line-up was an all-star cast, including Alexa Hampton, whom I had met previously at furniture market in High Point, NC. Also speaking were Nate Berkus, Bunny Williams, and Brian Patrick Flynn. If you haven’t heard of these stylemakers, I encourage you to check out their work… it’s awesome! 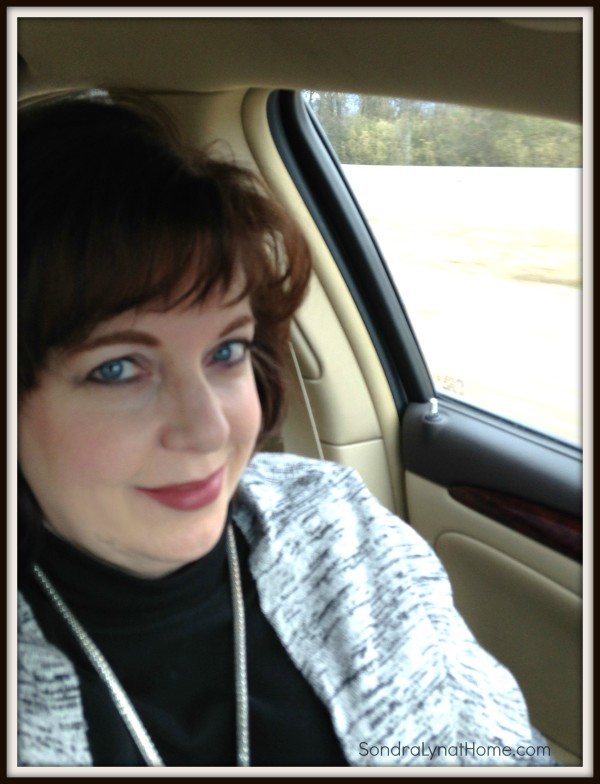 Throwing a kink into everything was the weather. On that Wednesday, parts of the south were expected to get LOTS of snow and ice. My plan was to leave that morning to drive over to Atlanta. Fortunately, I was able to get up just a bit earlier and still follow my plan. As I was unloading my car at the hotel, it began to sleet – so I made it just in time. And Atlanta never got any snow accumulation.

Aside from hearing from the fabulous A-list speakers, it was fun to network with other design bloggers and vendors at the event. Of course I was able to connect with the folks from Hansgrohe, who sponsored my scholarship to the conference… and they even called the 5 of us onstage! (That’s Jason McNeely with Hansgrohe in the middle) 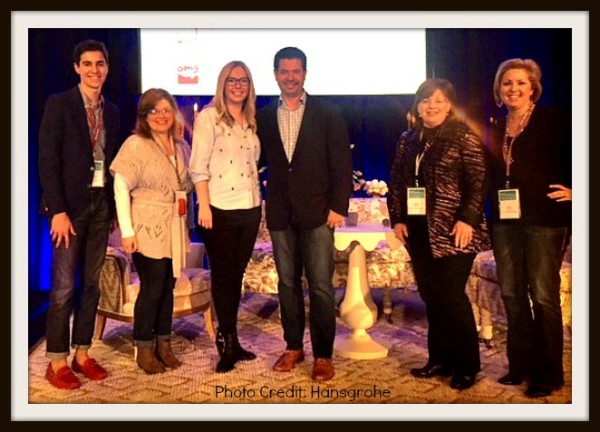 Due to the weather, Alexa Hampton wasn’t able to fly into Atlanta (sad face), so she conducted her workshop via skype. I had met her previously at furniture market in High Point at the Hickory Chair showroom, and was struck by her warmth and humility at that time. And she was just as personable while skyping with us. Speaking to us from her home, with little or no make-up, she was very relaxed as she gave us a glimpse into her design philosophy. She’s so down-to-earth… I love her! 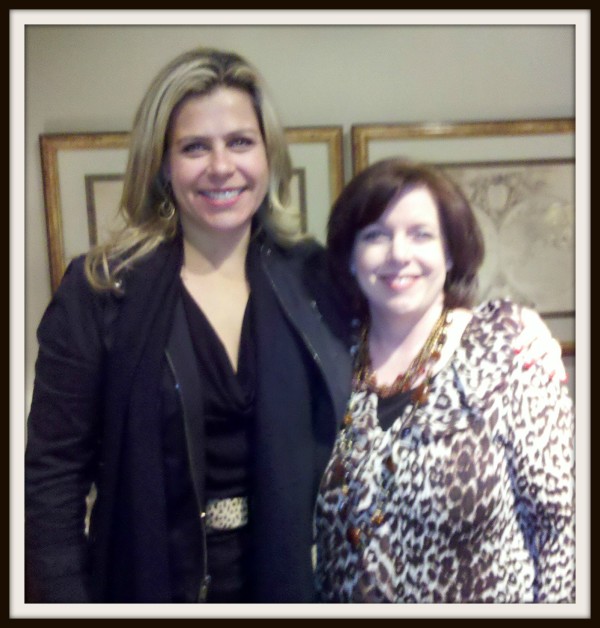 With Alexa Hampton at High Point 2011

Nate Berkus was our opening keynote speaker on Thursday. Nate got his start doing makeovers on the Oprah show – and the rest is history! He is now a well-known designer, as well as author, with his own line of fabrics for Fabricut and products for Target. Nate also returned to television in 2014 as host, judge and executive producer of a NBC’s design competition show ‘American Dream Builders’. His message to us as designers was to give ourselves permission to: 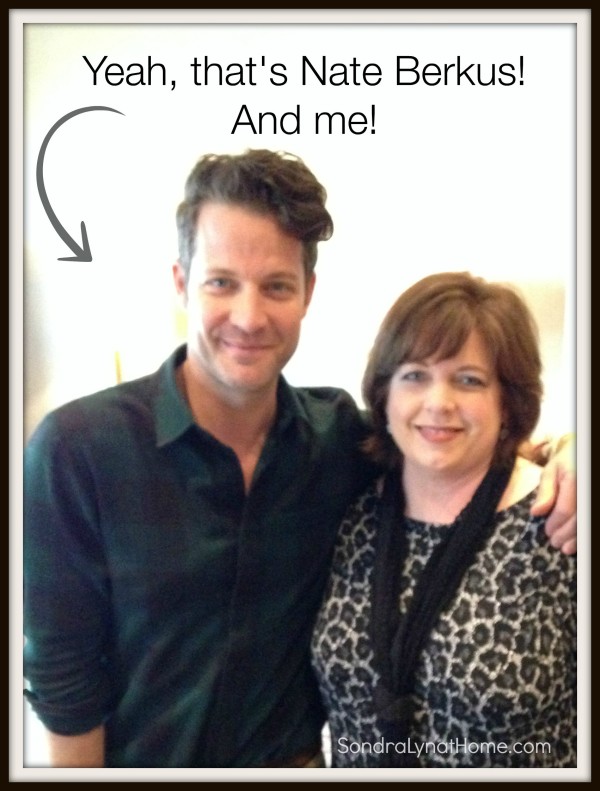 Bunny Williams spoke to us that afternoon. She shared slides with us of many of her design projects, and told us a little bit about her early days in design. She worked for some of the premier designers of days gone by, namely Albert Hadley and Sister Parrish, before beginning her own design firm in 1988. While I didn’t manage to have a photo taken with her, I did happen to meet her on her way out of the exhibit hall and thanked her for her inspirational talk.

And y’all, everyone didn’t meet these folks. I don’t really know how it happened… I was just (uncharacteristically) in the right places at the right times! I met all three of the keynote designers who were in attendance. Pinch me!!

Brian Patrick Flynn is a contributor on HGTV and you can explore many of his designs HERE. His keynote presentation was on Friday. He was such fun to listen to – he’s a high-energy guy, and was ALL OVER the ballroom! Never still for longer than 15 seconds, it’s easy to see how he gets so much awesome work done! He offered lots of insider tips for beginning to get noticed in the design world, such as: 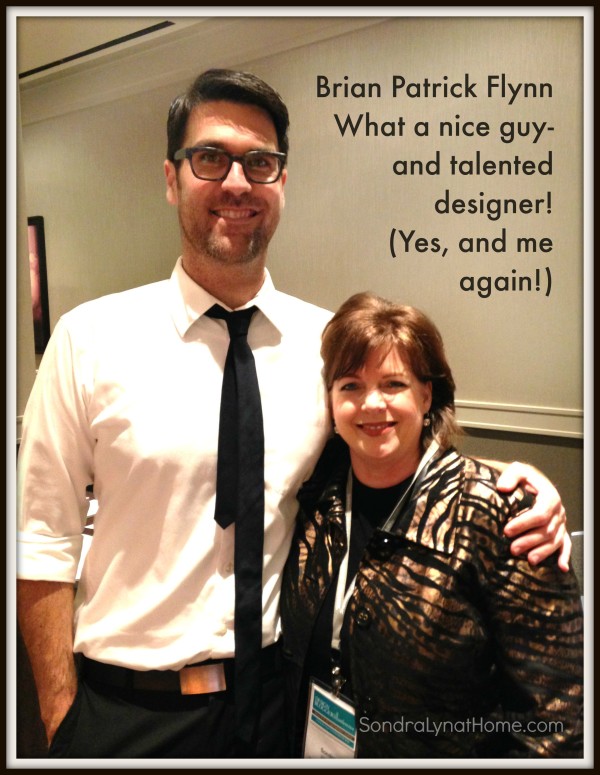 There were many other fabulous speakers who addressed the mechanics of blogging – everything from making YouTube videos to social media to collaborations with fellow designers and bloggers. It was quite a wealth of information!

And, of course, the vendors were over the top in their efforts to wine and dine us! Here is some of the swag we brought home: 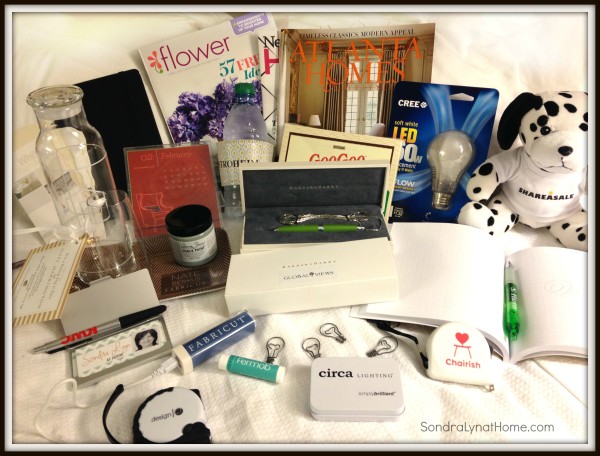 And one of the social highlights was the Italian Masquerade after party thrown by the Pirch showroom in Atlanta. They literally rolled out the red carpet for us! Most impressive was the La Cornue stove in my signature turquoise… 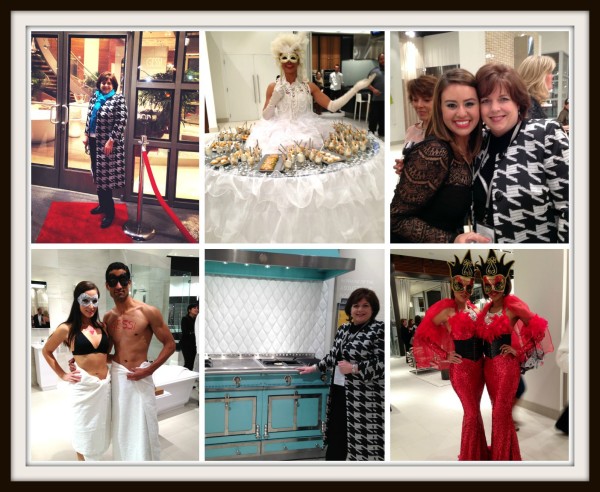 and an under-counter, built-in coffee machine which is uber luxurious! We were absolutely mesmerized!!

I hope you enjoyed your vicarious trip to the Design Bloggers Conference 2015. I’ll be back into my normal blogging schedule next week!

« Buttermilk Coconut Pie
7 Ways to Care for an Elderly Parent »