We are now in 2012, having discovered mother’s cancer and begun her chemo in October of 2011. In the previous installment, I forgot to include the fact that mother took another fall not long after the December one. On January 23, 2012, just over a month after her previous fall at our Christmas celebration, Mother was headed to close the blinds in the sunroom, and got tangled up somehow and fell. I was at work, but they called me and the EMT’s were still there when I got there. She was taken to the ER, and given 3 stitches to a gash in her head, but worse than that, x-rays showed that she had broken her right shoulder. So let’s pick up the narrative there…

Spring 2012– Ah, Spring! The time of new hope and blooming flowers! It is most welcome. Mom still has pain associated with a second major fall which resulted in her broken right shoulder. She has bruising on that arm that will last for the next few months.  There are ongoing battles with occasional infections and other setbacks. We make trips to the ER with nosebleeds, and high fevers… the chemo is taking its toll. If mom’s blood counts aren’t high enough, she doesn’t receive chemo treatments. My Dad becomes a nurse, giving her daily injections and administering medicines. He even learns to give IV meds through her port. I learn how also, but since I am still working full-time, the bulk of the day-to-day care falls on him.

Also in Spring 2012, our family experiences a very joyous occasion… our oldest daughter is engaged! We are invited to ‘spy’ on the proposal and have such a wonderful evening taking photos and then dining with the happy couple at a restaurant near the park. It’s a memory we will cherish. The date is set for September, and wedding plans are soon in full swing! This is the daughter whose wedding dress is featured in this previous post. 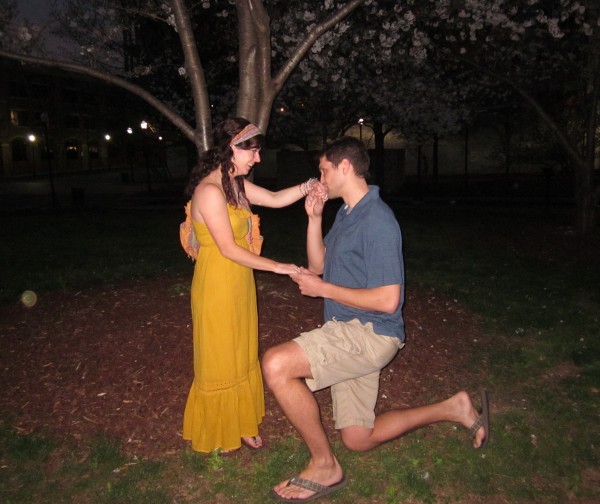 June 2012-  Mother has a routine CT scan on Monday, June 11, 2012. We always get the results the next day when we come in for her regular doctor visit. This time, we are blindsided by the results: While there is no sign of the pancreatic tumor, the liver tumor has grown by 23%. Not knowing at first the ramifications of this news, we are not shaken. But the doctor explains that the protocol for this clinical trial stipulates that if a tumor shows 20% or more growth then that study participant is removed from the trial. AGH! No WAY!! Our ears are hardly believing what they’re hearing! No more clinical trial? WHAT? How can this BE? She’s doing so well! We still manage to ask some other questions, and are told that now any further treatment is optional, and would be the standard chemo for liver cancer. The side effects are serious and not pretty. He advises mother to take a short break from chemo altogether and get stronger, then maybe look at taking the new chemo. We leave the office that day with much uncertainty about the future.

Also in June 2012, my husband’s 98 year old father, having become more and more frail, passes away and is laid to rest the day before Father’s Day. All during mother’s illness, my husband had been making frequent trips to the family home to check on things and help relieve his other brothers of their caretaking duties. I wonder if I have been as much support to him as he needed during this time. He has now lost both of his parents within a period of 6 months.

July 2012– Since we are taking a break from chemo, Mom and Dad would like to travel to Kentucky for a family wedding. Her sister’s granddaughter is marrying and we all decide to go! It is a beautiful occasion, and mother –as well as the bride– is radiant! We are seated at the reception with her sister (my aunt) and other family members. Mom has a ball… we all do! 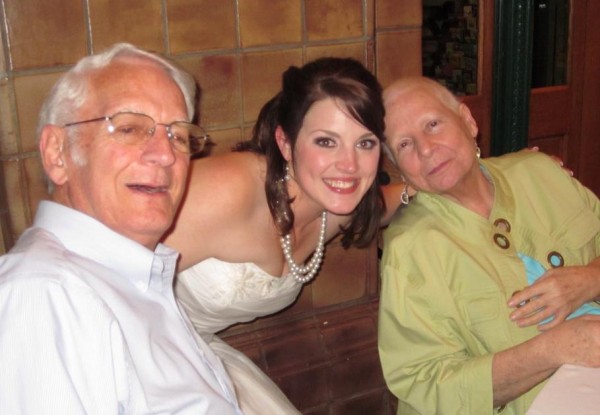 Mom and Dad with bride

Upon our return, and after further consultation with her oncologist, Mom decides to go ahead with the new chemo. She begins on July 17th. This treatment is a much longer infusion. Our Tuesday begins about 9 am with the labs and Dr. visit, then chemo begins at 12:00 and is over for the day at about 5 pm. Mother will go home with a pump pack (one drug on a 48-hour infusion). She will return the next day for a refill and then on Thursday to have the pump removed. The silver lining to the process is that these treatments are every 2 weeks, rather than weekly.

August 2012- Our daughter’s wedding plans are coming along! The date is September 22, 2012, and it’s right around the corner!

Well, that’s enough for now. I thought I could end with this installment, but there is still so much more to tell! Please stay tuned for the conclusion. And I promise, I will bring it all around to the title ‘How I Transitioned from Full-time Designer to Blogger’ !

You guys have a fantastic day. And tell someone you love them today!